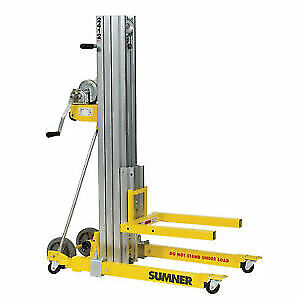 Everything You Need to Know About Scissor And Boom Lifts

Scissor and boom lifts are both used for the same purpose: raising somebody on a stationary platform into a higher setting to complete a specific task. Often found in construction and HVAC settings, both lifts provide a safe means of reaching greater heights to get the job done. eBay offers a wide selection of used lifts in good condition at a wide range of prices.

What is a scissor lift?

A scissor lift is an aerial work platform that can lift a person as high as 40 feet. Theyre meant to lift people as well as equipment they take with them to carry out work done in heightened settings. If there is an issue such as fixing a light bulb on the ceiling in a factory or adjusting a sign on the highway, scissor lifts are perfect for those types of tasks. With very little equipment required to operate these machines, the scissor lifts are extremely easy to operate and help complete assignments in an efficient manner.

What is a boom lift?

A boom lift, like a scissor lift, is a machine that elevates workers on a platform. The difference, however, is that this lift has a hydraulic arm that can help maneuver a platform better and also has a smaller platform since its more likely to carry more weight. If there is a job that requires more movement while in a higher setting, these lifts are the way to go. There are two additional types of boom lifts that can be used, and they are:

What are telescopic and articulating boom lifts

Telescopic boom lifts are used for jobs that require moving around more weight. If you are doing something such as moving a certain amount of a certain piece of equipment that is heavily weighed or delivering multiple weighted parts, a telescopic lift is the way to go.

What are other benefits of scissor and boom lifts?

Neither of these lifts will take up much space when they are stored. Scissor lifts can often be found in a regular storage space with other equipment in a warehouse because of their compact shape.