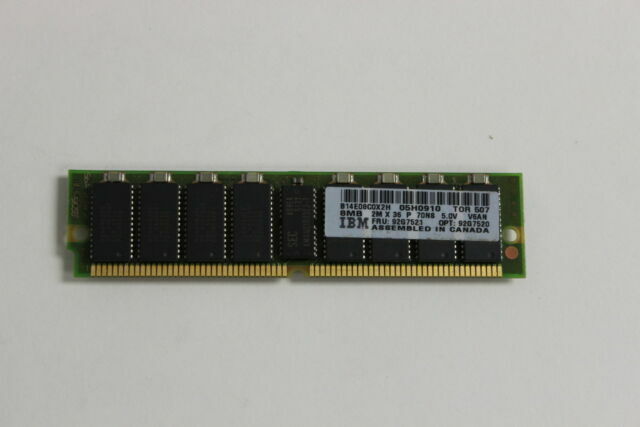 SIMM, or single in-line memory module, is a type of random access memory that was commonly used in computer systems in the 1980s and 1990s. The term refers to the card itself rather than the memory inside of it. Although not widely used since 2000, SIMMs can be used to replace or add to the memory of older desktops and laptops.

How does a single in-line memory module work?

The memory module is a small card-shaped device that contains the systems RAM module. The RAM is the part of the computer that temporarily stores all open programs and data while the system is running. The card itself holds six to nine memory chips per board. The ninth chip may be an error-checking chip that detects and corrects for data corruption in the memory. The card is actually a distinct piece of hardware; it can be detached or reattached to the systems motherboard at will, allowing you to replace or upgrade older memory when its time. Because it is distinct from the rest of the motherboard, the design of the card partially determines how much data can be transferred between the RAM and the motherboard at once. This greatly affects the performance of the RAM. The actual interface that connects with the motherboard is a critical component of the RAM.

What is the difference between DRAM and SDRAM?

DRAM stands for dynamic random access memory, and it provides a way to store data on a computer for a short period of time. DRAM is not synchronous with the computers clock. However, SDRAM, or synchronous random access memory, stays synchronized with a computers internal clock and allows for a more efficient way of storing and recalling data. Both DRAM and SDRAM can accommodate DDR3 and DDR4 memory options.

What is the significance of the number of pins?

The pins are the small, thin attachments that actually enable the RAM to connect with the PC’s motherboard. The typical SIMM card contains either 30 or 72 pins while a typical DIMM card utilizes a second row of pins. The 30-pin card typically holds between 256KB and 16MB of RAM. The 72-pin card, by contrast, is typically between 1MB and 128MB in size, although it can go higher. The earliest 30-pin cards could only transmit eight bits of data at once, but the later 72-pin card could transmit 32-bit data. Most cards contain pins on both sides of the module, but these contacts are largely redundant and dont necessarily increase bandwidth. The design of the card goes a long way toward determining the overall performance of the main system memory. However, in most cases, the design of the motherboard in your computer will be the determining factor that dictates what type of card can fit inside of it as most motherboards will only accept certain types of cards. Some computers also require multiple cards to be installed at once.

What are the dimensions of the typical single in-line card?

The typical 72-pin card is approximately 4.25 inches in length and an inch in width. The 30-pin module may be somewhat smaller. Check to make sure that the card will physically fit inside of your desktop or laptop first. Many cards are inserted into the socket at an angle and then tilted upward so they are perpendicular to the motherboard. Metal or plastic clips on the ends hold the module in place.