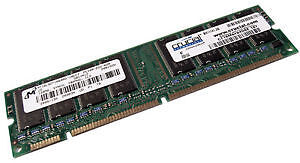 What You Need to Know About the PC100 SDRAM

If you want to upgrade or replace a personal computers system RAM, you may be able to use a PC100 SDRAM product. You can understand the benefits of a PC100 memory module and learn more about it here.

PC100 is a standard defined by the Joint Electron Device Engineering Council for internal, removable SDRAM products. It uses a clock speed of 100 MHz, a 64-bit bus, and runs on a 3.3V power supply. PC100 memory is available in 168-pin DIMM or 144-pin SODIMM packages.

What is the difference between DIMM and SODIMM?

DIMM stands for dual in-line memory module, and SODIMM stands for small outline dual in-line memory module. Generally speaking, the former is a longer package designed to be installed on its edge in desktop computers, while the latter is a shorter package that is installed laying flat in laptops. It is important to buy the package that fits the RAM slots on your computers motherboard.

What computers use this type of SDRAM?

PC100 memory was designed for computers that have a 100 MHz front-side bus. They can be installed in computers that use a slower memory standard like PC66, but you will encounter problems if the computer has a faster bus than 100 MHz. This is because the computer will send information to the memory stick faster than it can read it.

What are some indications that new SDRAM may be needed?

Computer memory has a limited lifespan because its internal components that store data may wear out. Below are some of the symptoms of malfunctioning computer memory, which helps determines when it is time to replace it.

How is PC100 SDRAM installed?

Installing SDRAM differs from one computer to another. Generally speaking, there are a few things to keep in mind when you install RAM yourself.Here are the steps to take: