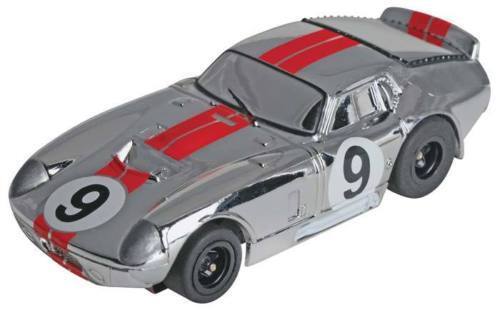 HO slot cars have been a wonderful pastime for many youths and adults for more than half a century. While the technology has changed, the thrill of watching cars zip along a homemade track never gets old. Not only are they fun to race, but they can also make a neat addition to any hobbyists dioramas.

What are slot cars?

They are model cars of various designs that have a small metal pin extending under the chassis that allows for contact to be made with the track. Originally designed to add automobiles to train dioramas, they quickly developed into a niche hobby for racing enthusiasts. As the technology has evolved, the size of the cars has increased in order to fit larger engines for more speed. A big part of the slot car scene is making custom 3D printed cars that allow for near endless customization of the body and decals.

What is an HO scale?

The most widely used scale for model trains and other diorama builders is the HO scale. It is also sometimes known as the 1:87 scale. This means that every 3.5 millimeters is equal to 1 foot. This allows for details to be included but also for a visual sense to be differentiated between large and small objects. The HO scale is half of the more traditional scale of O and means that more details and objects can be presented in a smaller space without losing visual fidelity. Since its inception, this has been the go-to scale for all American-made slot cars and tracks. These slot cars are available from various brands, including ThunderJet, AFX, and TYCO.

How do you set up an HO slot car track?

Some tracks are made from either rubber or are cut from entire sheets of metal. But most tracks are made of plastic or custom-made sets cut from sheets of metal or, in some instances, wood. No matter the type of track you use, all of them have small metallic grooves to allow for electrical current to flow around the track and power the slot cars. For those using tracks that can be moved and interchanged at will, there are a few things that you should take into account when creating race courses. Some knowledge of electrical wiring is needed in order to ensure proper voltage is applied directly to the tracks. Most courses use two or more powered tracks to evenly distribute power to the HO slot cars.