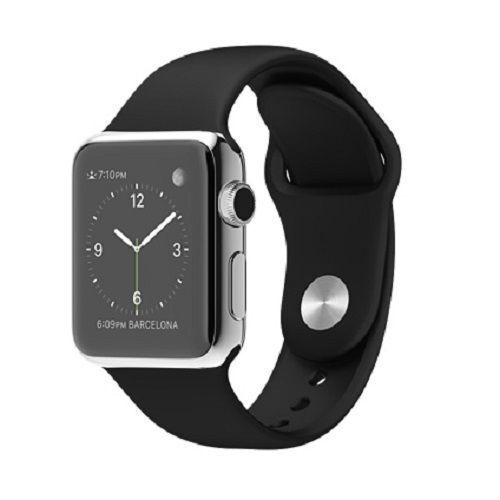 Using Bluetooth®, Apple Watch connects to your iPhone to provide many of your phones functions, right from your wrist. Whether you’re at the gym, or driving to work, Apple Watch is your perfect companion. With more than 20,000 apps available from the Apple App Store, you can find one for virtually any function or need.

To create their version of the world’s best digital watch, the team consulted watch historians to assist in applying classic watch design elements. Perhaps the most innovative was the digital crown, which appears to be a knob on the side of the watch just like those found on traditional watches. But, this one allows you to zoom in and out, access apps and navigate back to the home screen.

There is also an Apple Watch Hermes for those who value style in addition to function. These feature handmade leather straps imported from Paris. The strap choices include Single Tour, Double Tour and Cuff, and color choices include Rose Jaipur, Bleu Agate, Étoupe and Anémone.

Evolution of the Apple Watch

The original Apple Watch doesn’t include an internal GPS, so it uses its connection to iPhone for determining location. The Taptic Engine supplies haptic feedback to alert the wearer when supported apps receive updates. The heart rate sensor uses visible-light and infrared light to monitor. 8 GB of RAM are included and there is storage for up to 2 GB of music and 75 MB of photos. There are many styles and custom bands to choose from.

The Apple Watch Series 1 introduces a dual-core S1 processor and a lower price than the Original Apple Watch.

The Apple Watch Series 2 features a new S2 dual-core processor. It is water resistant up to 50 meters. The display is twice as bright as previous models. It also contains a GPS, so apps that access location information no longer require pairing with an iPhone.

Series 3 of the Apple Watch has a faster dual-core S3 processor. Bluetooth 4.2 is included. Bluetooth 4.2 features 250% faster data transmission and 10 times the packet capacity of earlier versions, along with features to allow apps to control power consumption and connections. Increased RAM, as well as processor speed means that you can have conversations with SIRI. The Series 3 also includes LTE cellular connectivity.

What are the new features in Apple Watch Series 3?

What are the benefits of watchOS 4?

Released in September 2017 and a free download for Apple Watch owners, watchOS 4 offers many new features and refinements. Here are a few of the most useful ones:

2011 – Apple files a patent for the iTime, which looks like a wearable Nano and features a headphone jack. It also has haptic feedback, accelerometers and a GPS. It uses gesture control, which seems like a probable future feature.

2013 – Apple patented the iWatch, which had a few features that haven’t made it into the Apple Watch… yet. It was a snap bracelet design with wraparound display, powered by kinetic energy charged by the wearer’s movement. It also mentions a virtual keyboard, although this idea proved awkward to implement.

2014 – In April, Apple patented a wrist-watch device. It had a square display, which was the first hint and what the finished Apple Watch would look like. It also featured a cell phone element and a camera. Maybe the camera will show up in a future version?

2014 – Apple Watch is announced by Tim Cook at Apple’s September 9, 2014 keynote event. Everyone is given a preview, but it won’t launch until 2015. Tim said that the Apple Watch was "a precise timepiece, a new intimate way to communicate from your wrist, and a comprehensive health and fitness device."

2015 – Apple Watch is released in April, but could only be ordered online. It reached Apple Stores in September.

2017 - The Apple Watch Series 3 is introduced on September 12, 2017, with the announcement of iPhone 8 and iPhone X. The Series 3 is the first Apple watch that runs many features without being tethered to an iPhone.

Come to eBay for the widest selection of Apple Watches. You’re sure to find the perfect one.

AsGraduation approaches, shop for gift cards, personalized commemorations, Apple Watches, and more to celebrate all that the students in your life have accomplished.