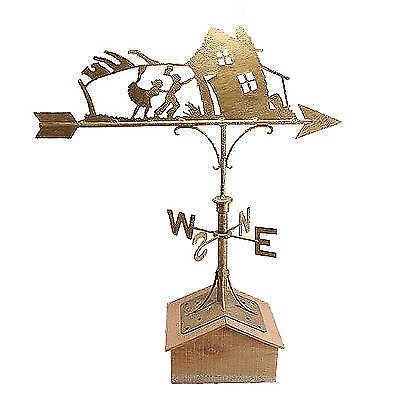 A Quick Guite to Antique Weather Vanes and Lightning Rods

The first weather vanes were made by the ancient Greeks, but it was not until after Benjamin Franklin became fascinated with lightning that the first lightning rods were used. After Deacon Shem Drowne started making them in the Boston area, almost every home in Colonial America had one that was made out of a material like copper, iron, zinc, aluminum or wood. If you are starting to think about collecting weather vanes or lightning rods, then you may be able to find just the right antique weathervane on eBay at an affordable price.

How does a weather vane work?

What brands of weathervanes are available on eBay?

Early settlers to the United States brought weather vanes and lightning rods at general stores or ordered them from mail-order catalogs after 1850, although those made before that time were usually made in the local community. There were many different makers of weather vanes that collectors prize today, including:

What styles of lightning rods are available?

When lightning rods are separate from weather vanes, they have five parts, including the cable that runs to the ground. The very top ends at a point that is attached to a metal rod. Near the bottom of the structure is a glass ball that can be very plain or made of colored glass. The rod stands on a metal base that usually has two to four legs. A lightning rods job is to act as a conductor when lighting strikes. They are a method of lightning protection that directs electrical currents through it and down into the ground, where the electricity is less likely to cause damage to structures or danger to people.

How do you select weather vanes and lightning rods on eBay?

When choosing an antique weather vane or lightning rod for your needs, eBay has several categories that can make your choices easier. These are: